How to Unclog Toilets with Baking Soda?

How to Unclog Toilets with Baking Soda?
Checkout my video this is a summarized version of our in-depth article below.

Do you know how to unclog toilets with baking soda? Yes, you read that right. You can unclog your toilet using that white powder that has many household uses. Before you contact a plumber, you can use baking soda to try and repair toilet clogs at a low cost. 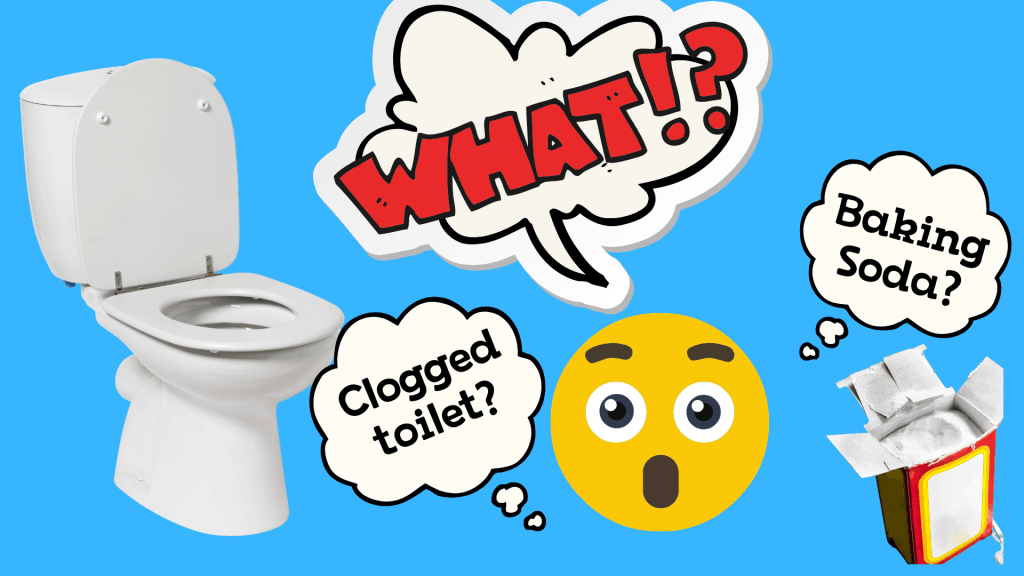 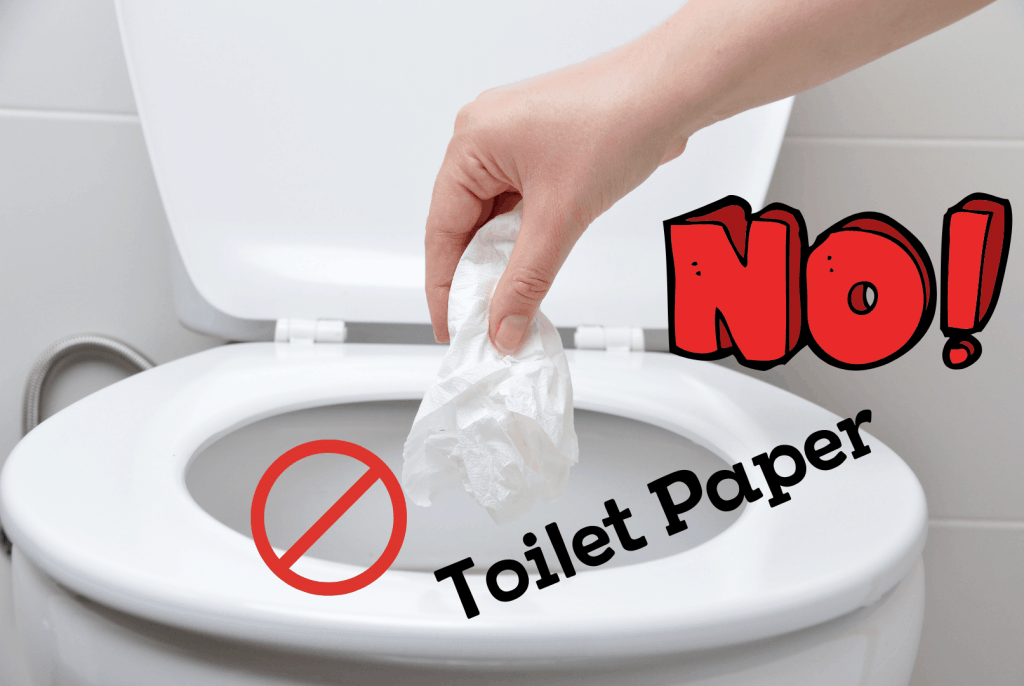 You can avoid clogs by minimizing the usage of toilet paper. Only particular items, such as human waste and toilet paper, should be disposed of in toilets. If you avoid flushing things that aren’t meant to be flushed, you can significantly minimize your toilet’s clogging problem. Between the drain line and the bowl is an S-shaped pipe that may get clogged or filled with toilet paper. Roof vents are used in modern toilets to get fresh air into the plumbing system and increase flushing pressure. The vents may get clogged with sticks or grass over time. If the toilet vent is clogged, the flushing pressure is reduced, causing the toilet to clog frequently. And if there is a blockage in the sewage pipe, your toilet can get clogged on a regular basis. Just Keep on reading to know how to unclog toilets with baking soda among other household items.

If it appears that the toilet is about to overflow, remove the tank lid immediately and close the toilet flapper. Water can flow from its tank to the bowl through the flapper. Remove the cap before pulling the trigger if you’re afraid of your flush escalating into a flood. After that, you can press the flusher with one hand while keeping the other close to the flapper. Be prepared to stop  the moment the water looks to be rising. 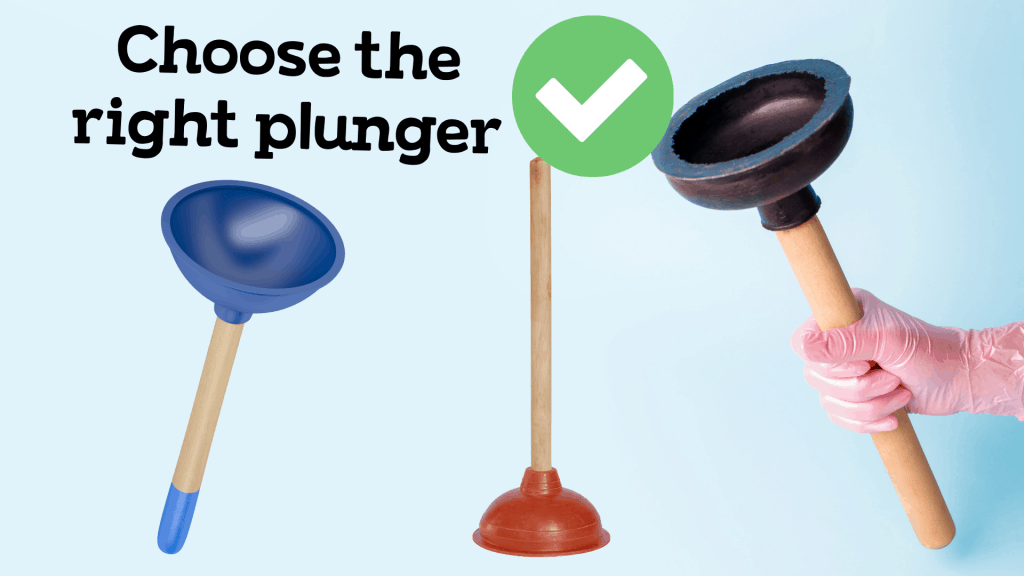 A tight seal between the plunger and the bowl of the toilet is required to effectively operate a plunger. The ideal plungers are funnel-cup plungers, a flange, or extra piece, extending from the rubber cup’s bottom. Plungers that are stiff and hard don’t function along with those that are pliant and soft. When you use your plunger, run it under hot water. The rubber will soften, providing for a stronger seal on the toilet bowl. Simply shut the flapper to prevent water from entering the bowl if the toilet overflows once more. Use the plunger and flush until the blockage is gone. 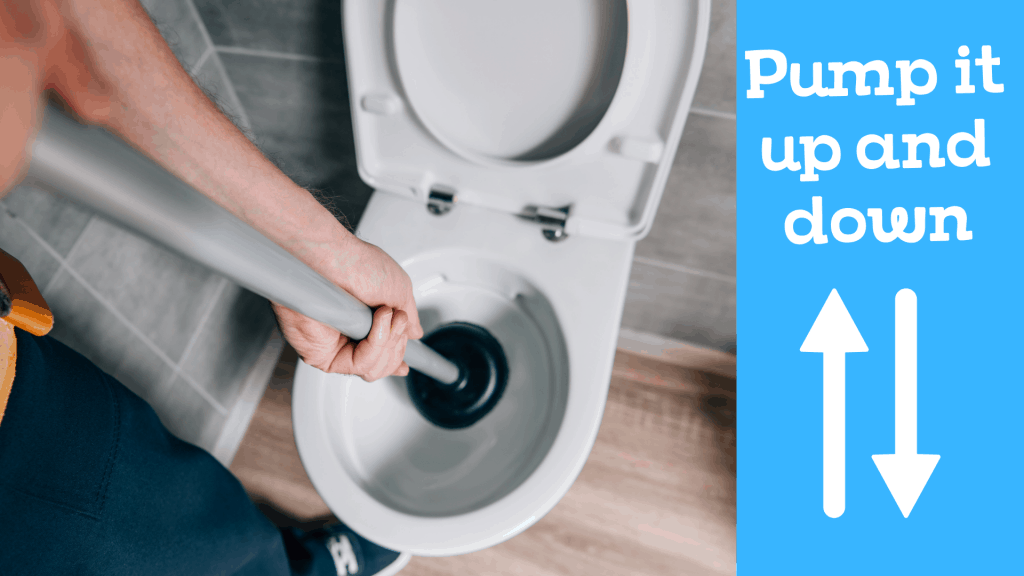 Place the plunger in the bowl and press it against the exit hole to create a solid seal. When plunging, many people just focus on the downward pressure. However, the reversal is as significant. Pump the toilet with a couple strong up and down strokes with the plunger. You’ve unclogged the toilet when the water starts to  drain freely again . 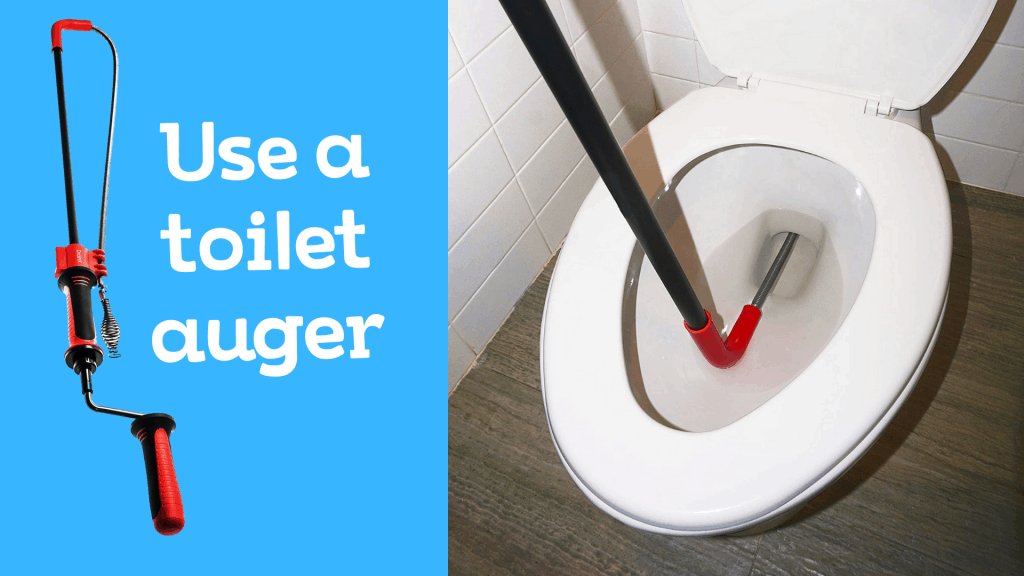 If the plunger fails, you can use a toilet auger. An auger is similar to a cable tool that you snake down the toilet to assist unclog it. Augers may be found in the majority of hardware stores. To use an auger, just snake it down the toilet hole. Rotate on the end of the crank you’re holding until it stops turning. This means you’ve reached the end of your blockage. 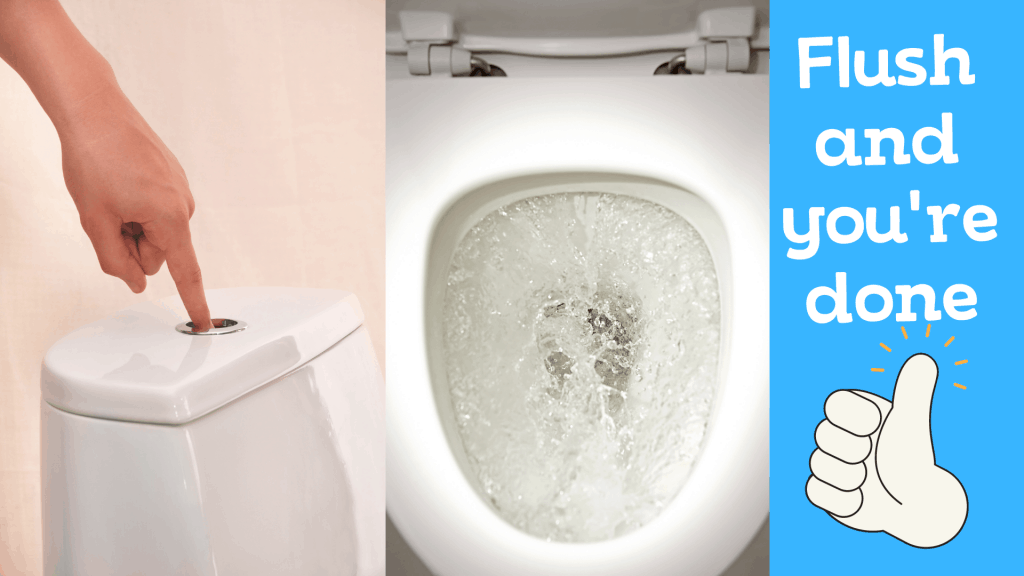 Either the auger is going to break apart the blockage or it will hook directly to it. Take out the clog if you think you’ve got it. Remove any waste from the auger’s end. To eliminate any remaining blockage, you should consider giving the toilet a few strong plunges. Flush, and you’re done clearing the toilet!

What can you do if you don’t have a toilet plunger or auger? Here are some plunger alternatives to help you.

How to Unclog Toilets with Baking Soda and Vinegar?

Do you know how to unclog toilets with baking soda and vinegar? Many people use this  to unclog sinks. Baking soda and vinegar, when mixed together, can sometimes unclog a kitchen sink, but it can also unclog a toilet in many circumstances. However, you’ll want to measure it properly to avoid a little explosion all over the floor of the bathroom. The first step is to determine the extent of the clog. 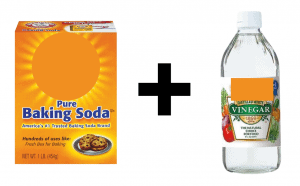 You’ll need an equal amount of each. If the clog is minimal, you won’t need to pour the baking soda and vinegar down in stages; you’ll use the entire amount at once. If the blockage is really persistent, though, you’ll need to use lesser quantities in smaller stages. Why are you doing it in stages? Because you don’t want the bubbling to get out of hand and create a huge mess. 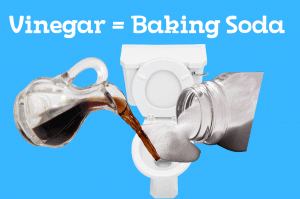 Pour all of the baking soda specified into the toilet bowl if the clog is minimal. If the blockage is serious, pour about half a cup of baking soda into the bowl. Always use the same amount of baking soda and vinegar, one cup of vinegar for every one cup of baking soda. You’ll notice them bubbling when they mix. The bubbling will begin straight away, but it should rapidly fade. Allow them to do their job by leaving the mixture alone for several minutes. 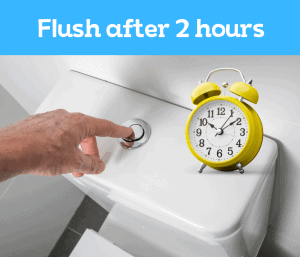 Allow for at least 2 hours, or overnight, for the mixture to drain. After 2 hours, try flushing it if the stagnant water has emptied. Allow the mixture to sit overnight before flushing if it appears to be still clogged. Do it all over again and follow the steps here on how to unclog toilets using baking soda and vinegar if the toilet does not unclog the first time.

How to Unclog Toilets with Baking Soda and Salt? 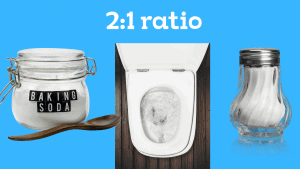 How to Unclog toilets with Dish Soap?

Here are the steps on how to unclog toilets with dish soap. On the stove, heat a gallon of water over low to medium heat. For easier pouring later in the unclogging process, use a pot with two side handles. 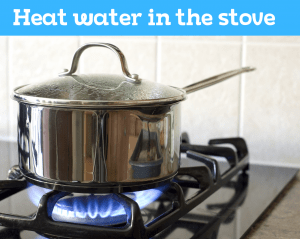 In the toilet, pour roughly a half cup of liquid dish soap. You don’t have to be exact, but try to stay close to this figure. Allow 10 minutes for the soap to dry. The soap may be enough to clear the clog. 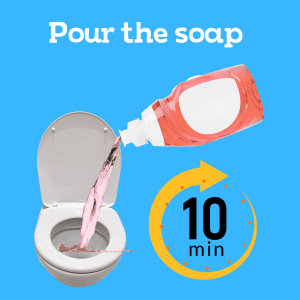 Before the water starts to boil, remove the pot from the stove. Bubbles will begin to appear on the bottom of the pot, indicating that the water is heated and about to boil. 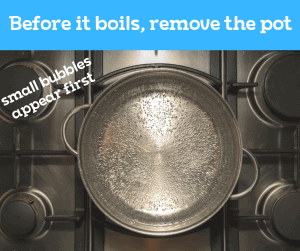 As quickly as possible, pour the water into the toilet. Hold the side handles for extra control so you don’t get splashed with hot water. If the toilet is on the verge of overflowing, consider using a plunger after letting the dish soap soak for 10 minutes to allow some of the bowl water to drain. 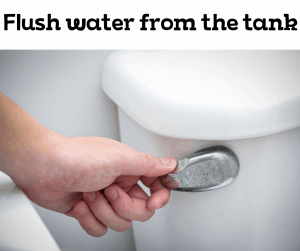 Flush the toilet after 2 to 3 rounds to see if the clog is gone.  Allow around 20 minutes for each gallon or 3.8 Liters. of hot water to settle. 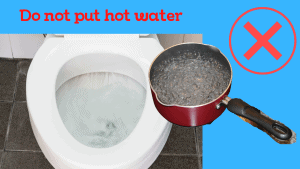 Turn off the water valve behind the toilet and near the floor if you’re worried about extra water entering an overflowing toilet when you try to flush. Just a little warning on how to unclog toilets with dish soap, boiling water should not be poured into the toilet bowl because it may cause the bowl to break.

How to Unclog Toilets with Snake?

A snake, also called an auger, is a plumbing equipment that is used to break up and remove blockages in narrow pipelines. The snake’s unique form enables it to bend and infiltrate the toilet’s lower plumbing’s complex curves, which are beyond the reach of traditional equipment. 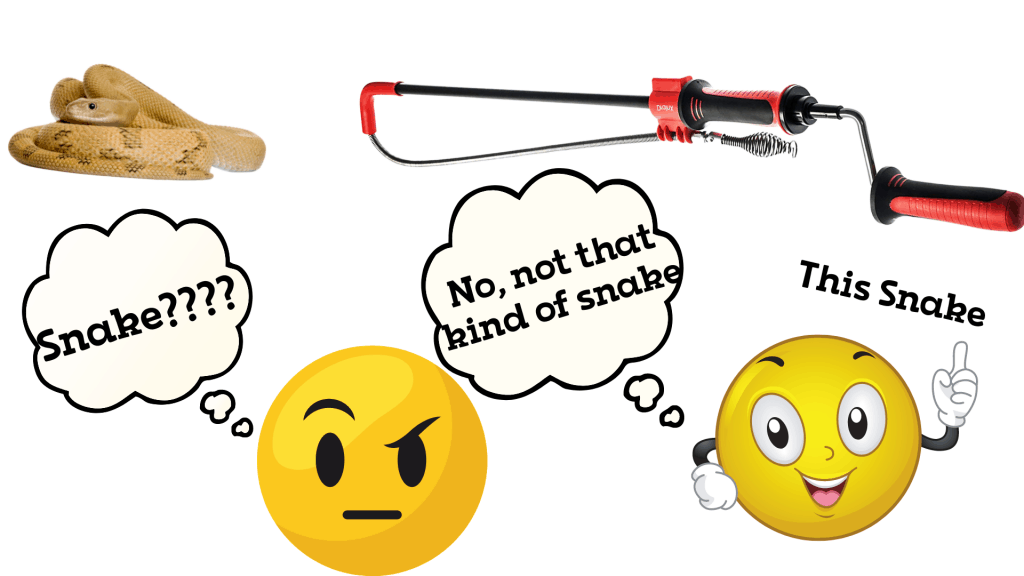 Here’s how to unclog toilets with snake: 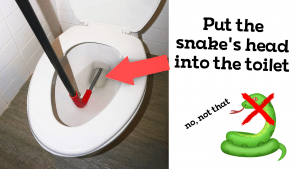 Rotate the crank handle in a clockwise direction. Begin gently spinning the handle on the opposite end after the snake is in place. This will lengthen the snake and force it through the pipes slowly. Because plumbing snakes are made of flexible metal coils, they can bend and follow the curvature of pipes as they are unwound. 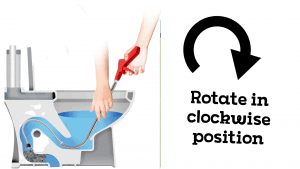 Look for the source of the blockage in the pipes. It’s possible that the snake has encountered opposition if it slows down or comes to a halt. To assist the snake in loosening whatever is lodged deep in the pipes, lightly jolt the shaft. Keep twisting the handle clockwise until the snake has passed through the pipe.

As much of the blockage as possible should be broken apart or pulled out. Rotate the handle in the opposite direction (counterclockwise) to retract the snake and observe what it has accumulated after you have located and worked over the clog. Rather than trying to force the clog deeper into the pipe, always take it out. Continue this procedure until the pipe is entirely clear. 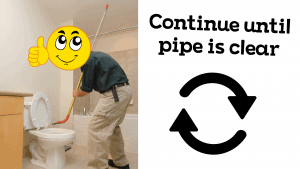 After each usage, the last process on how to unclog toilets with a  snake is to make sure to clean it.

How to Unclog Toilets with Drano?

One of the most well-known chemical clog removers on the market is Drano. For the correct amount of product to use, refer to the package directions. Drano works by using an oxidizing chemical reaction to dissolve the object blocking the drain. 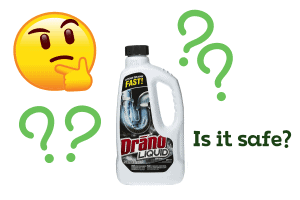 So, how to unclog toilets with Drano? With the palm of your hand, gently press down on the childproof cap and turn it counterclockwise. Avoid squeezing the bottle or splattering the product. Any spills should be cleaned up right away. To secure the cap, press down and tighten it. Run warm (not boiling) water through the drain for one minute if it is slow to drain.

Turn off water and dump one-fourth of a 64 ounce bottle immediately down the drain. Run the water for a second time (about two cups) to activate and disperse the formula throughout the pipe walls. 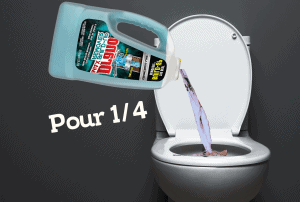 Follow the above instructions for three nights in a row, using two ounces of Drano Max Build-Up Remover for more severe problems. Flush four ounces down the toilet for three consecutive days if you have a slow-running toilet. After each treatment, wait six to eight hours before flushing. 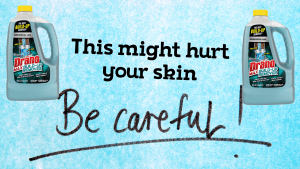 And that’s how to unclog toilets with Drano. But, there are reports that Drano does not instantaneously clear a clog. Depending on where the blockage is, it will sit in the toilet or further down the pipes until it dissolves. As a result, it continues to produce heat. This can break the porcelain toilet bowl, necessitating the replacement of the entire commode, it can soften plastic (PVC) pipes, and harm aged, rusted pipes. It’s possible also that splashing Drano on yourself while plunging can hurt your eyes or skin.

How to Make All-natural Homemade Drano 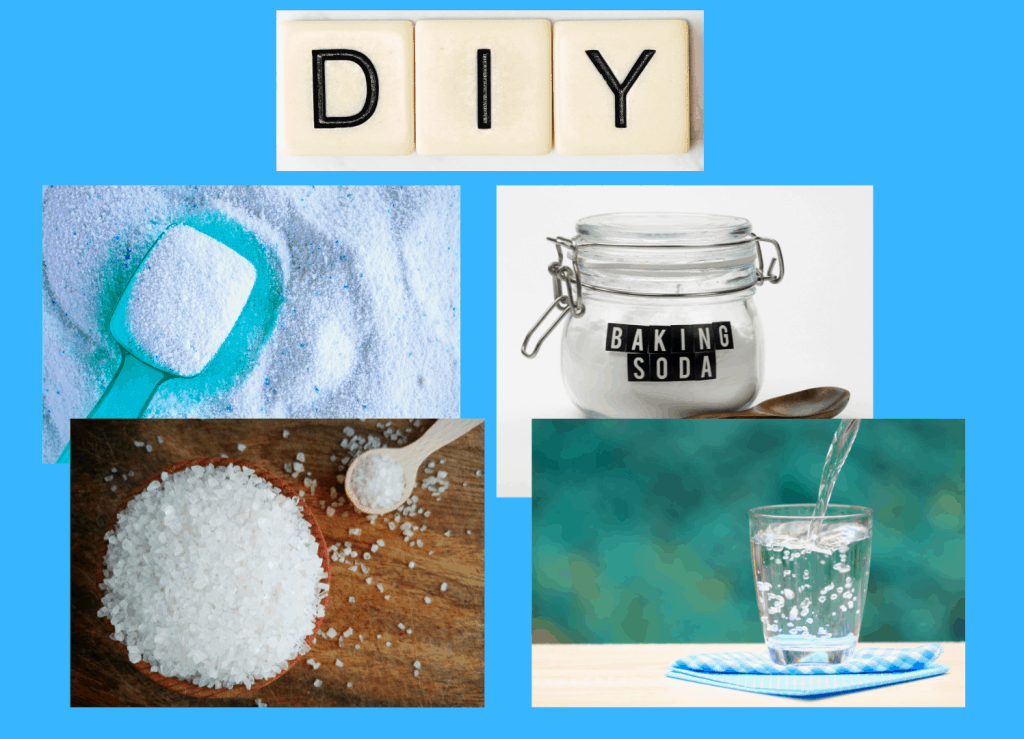 Combine the following ingredients in a mixing bowl: 8-10 tablespoons dish detergent, 2 cups baking soda, one-fourth cup Epsom salt (this should be added one tablespoon at a time.  Fill individual muffin liners halfway with the mixture, then set aside to dry and firm overnight. Toss one into the toilet bowl the next morning, add four glasses of water, and wait a few hours to see what happens. 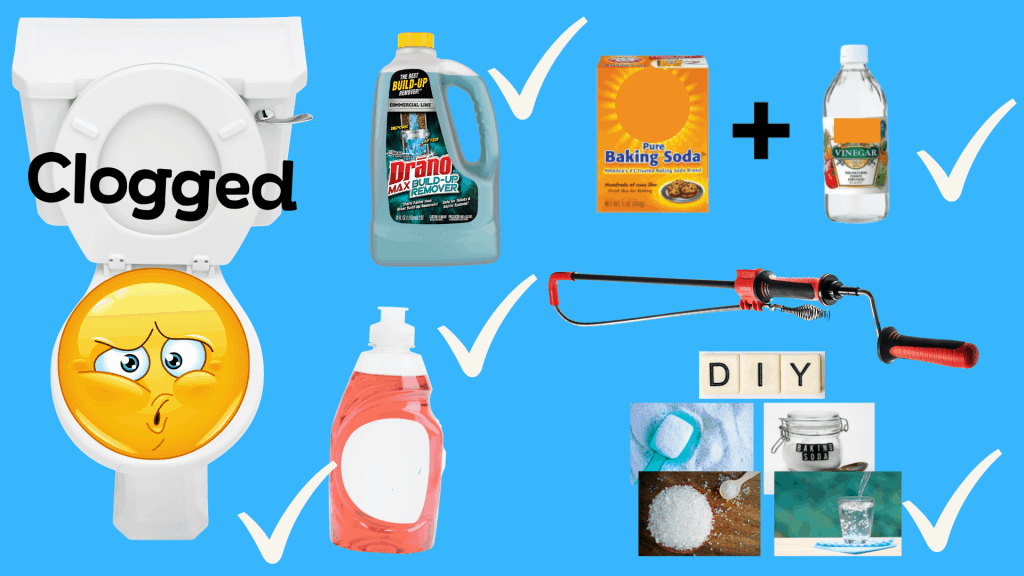 Toilet clogs are not only annoying, but they may also cause serious damage to floors and water lines, necessitating expensive repairs.  Last tip would be to remember that the only items that should be flushed down the toilet are human waste and toilet paper. Your toilet will last you a long period of time if you maintain it properly.